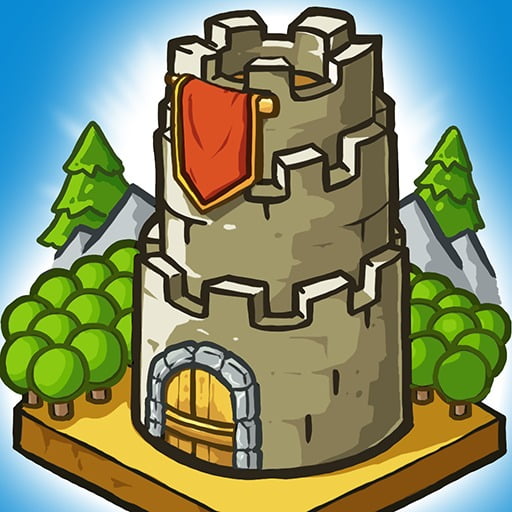 Explore this article
SIMPLE YET ADDICTIVE GAMEPLAYBUILD THE TOUGHEST DEFENSE LINETIMING PERFECTLY, SPAWN MINIONS, OR USE SKILLSUPGRADE YOUR CASTLE AND TROOPSEXCITING EVENTS WITH TIME-LIMITED CHALLENGESFIGHT WITH EPIC BOSSES TO PROTECT THE CASTLE

Grow Castle MOD APK (Unlimited Money) is one of the outstanding games of the tower defense genre. With simple gameplay and fun graphics, it’s hard to deny its presence on your Android device.

Idle Defense games are an entertaining and tactical genre when players continuously develop their stronghold to fight countless monsters’ waves. And Grow Castle Mod Apk is also a game of that genre, but with simple graphics and user-friendly gameplay. In this game, players will have to build strong lines of defense against the army of monsters. Accompanying them will be an endless upgrade system, with the Idle mechanism to optimize the player’s defense. As the battle goes further, new units will appear, powerful monsters will be created, even more objective for the player. If you are confident in your defensive tactics, this game will be a worthwhile experience. 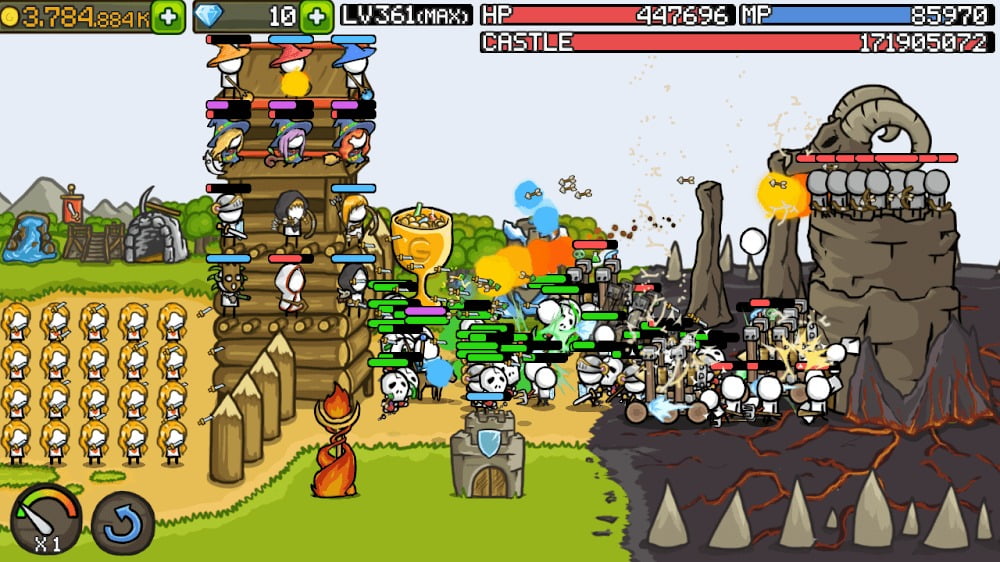 The gameplay of Grow Castle Mod Apk is a perfect combination of defense and strategy, where players must use available resources to build the most powerful defense. However, instead of making the defense endless, the player’s journey will be divided into many challenges, even many special events for players to enjoy. Each game mode will have its own data and automatically save the player’s progress to enjoy the game anytime, anywhere. The game will also introduce players to a massive upgrade system, divided into many different categories with various combat units and technology. Of course, the enemy will automatically upgrade according to the player’s level, and the most important factor is still the player’s strategy. 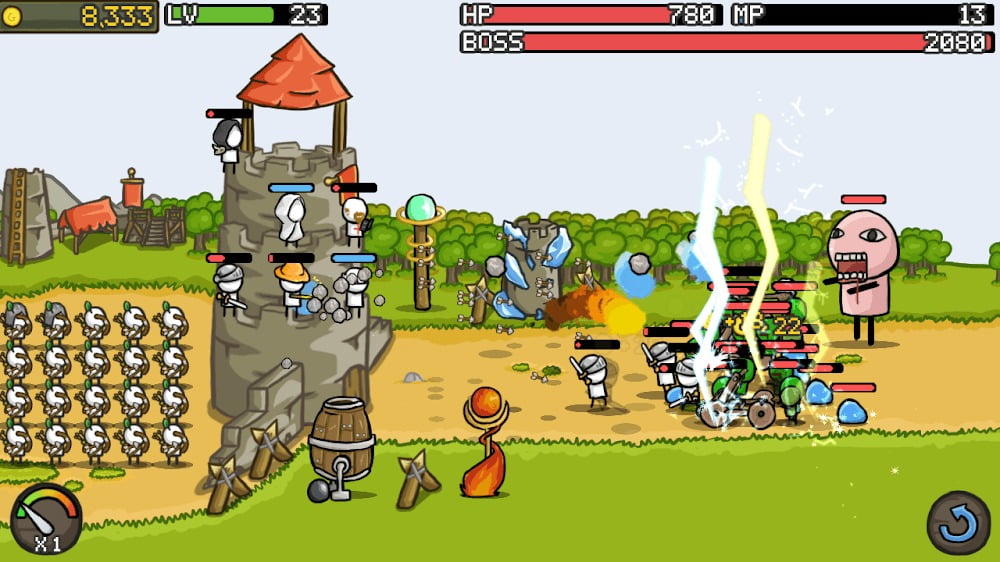 This game’s defense mechanism is simple, consisting of three main areas: the vanguard, the wall, and the rear. Each area is suitable for building a particular type of defense, but along the battlefield’s roadsides are used to build gadgets or turrets with special powers. The rear will gather archers, continuously providing support to the frontline with countless arrows. On the wall is for heroes, with great strength, and who can support an army of large areas. And players will be supported with an upgraded system, allowing the defense to increase constantly, and the player can face more enemies.

While defending, players must know the perfect timing to face giant or powerful enemies. Players can use many active functions to fight, like spawn minions, use skills, and pinpoint goals. Each function will take some time to cool down; even the minions will automatically disappear after a period of time. Each function has its own characteristic, and they are influenced by many elements of the game, like the upgrade system and heroes. 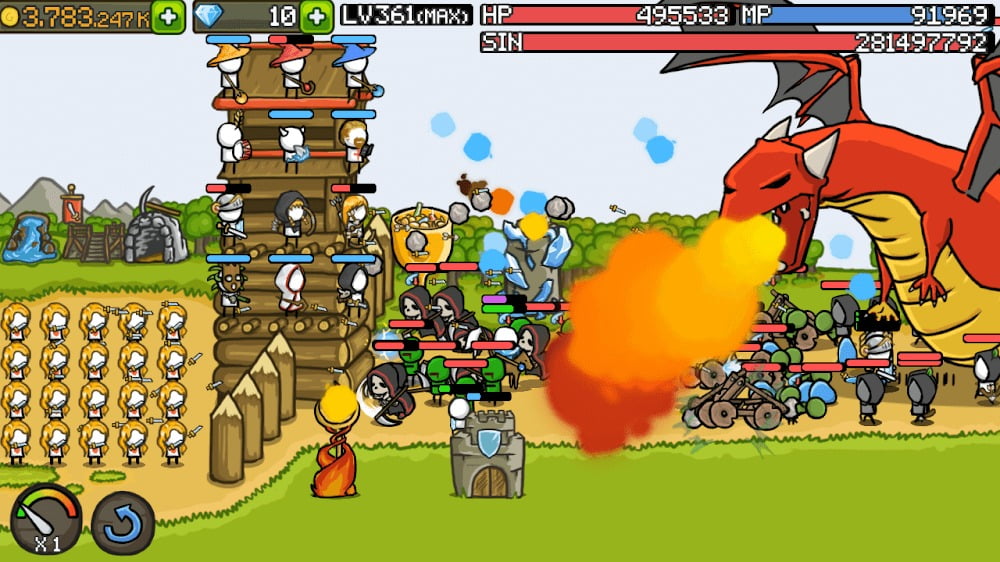 UPGRADE YOUR CASTLE AND TROOPS

Human defenses depend on the player’s stronghold, so they need to build their strongest defenses to face aggressive monsters. “Grow Castle Mod Apk” will present players with an endless system upgraded and diversified, as it includes many other areas so that players enjoy the game. Players receive money each time they defeat monsters, and they can use them to upgrade archers, troops, and heroes on the walls. Each upgrade function unlocks new things, and players can improve each unit’s quantity and quality to a new level. The upgrade system also affects the army’s general skills, and the player can evolve entire walls if they reach a certain level.

Grow Castle Mod Apk will give players many entertaining activities to relax with other players around the world. Special events and challenges will all give players interesting rewards, like defensive units and powerful heroes. However, their levels are separately designed, and the player must use available resources to build new defenses and fight new enemies. The player’s achievements are recorded and even honored by the world. Of course, special events and challenges are endless, and players can challenge themselves with how far they go with their own defensive skills. 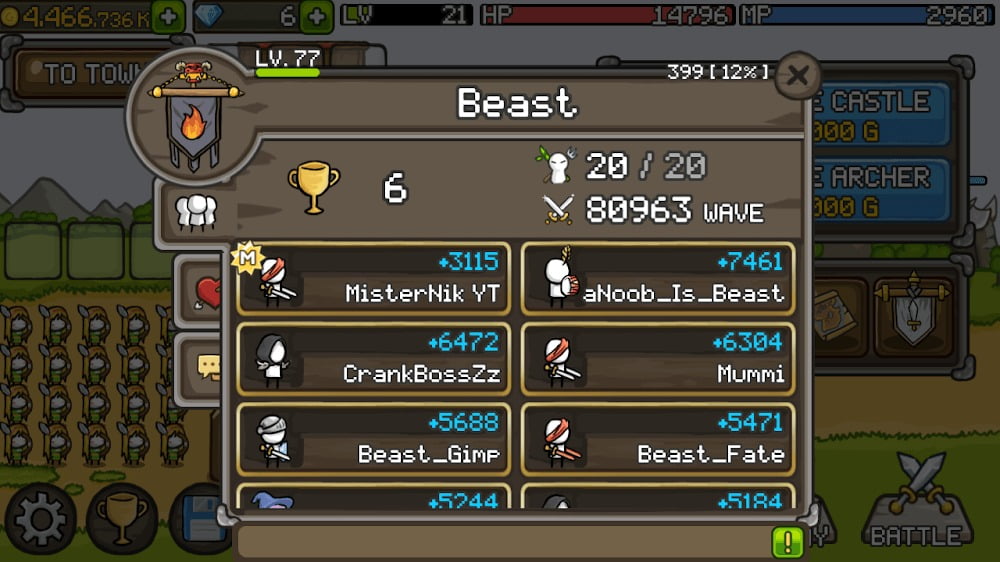 FIGHT WITH EPIC BOSSES TO PROTECT THE CASTLE

Every 5 challenges will appear a Boss class creature in the player’s journey; they have extremely persistent strength and defense and continuously spawns smaller monsters. Players will be able to use the advancement function, a form of minion control, to attack bases and bosses. However, the ability will not activate because the game will limit the area of ​​use, and the boss will always be out of attack range. Therefore, the player will have to improve the minions’ power to take down any enemies along the way. Grow Castle Mod is considered one of the highly entertaining games, and it is a perfect combination of many elements for players to enjoy. If you want to challenge your defense tactic, this game will be a new experience. It also gives you many surprises in the upgrade and defense process, ensuring you always have the most fierce battles with this game.

You are Now Ready to Download Grow Castle For Free. Here are Some Notes: